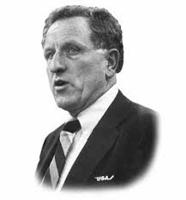 “Badger” Bob Johnson – Bob Johnson was an American college, international, and professional ice hockey coach. He coached the Wisconsin Badgers men’s ice hockey team from 1966-1982 where he led them to 7 appearances at the NCAA Hockey Championships, winning three titles. Bob also coached the United States men’s national ice hockey team at the 1976 Winter Olympics. He then went on to coach the Calgary Flames for five seasons making the playoffs each time and a Stanley Cup Finals appearance in 1986. The peak of his professional coaching career came during his season with the Pittsburgh Penguins in 1991 where Bob, along with “Super” Mario Lemieux led the Penguins to their first Stanley Cup in franchise history. Similar to Jim Prior, Johnson is a Korean War veteran having served as a medic. Bob’s coaching expertise wasn’t just limited to the professional level though. He also served as an executive director for USA hockey and coached high school hockey for Roosevelt High School in Minneapolis. He was inducted into the Wisconsin Hockey Hall of Fame in 1987, the United States Hockey Hall of Fame in 1991, and the Hockey Hall of Fame in 1992. The Wisconsin Badgers even named their home rink “Bob Johnson Rink” in honor of him. His famous catchphrase “It’s a Great Day for Hockey” is a great reflection of his passion and love for the game.