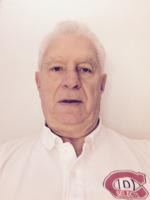 Jim Salfi – Jim Salfi is the former founder, co-owner, general manager, and head coach of the Capital District Selects of the old EJHL. Salfi founded this organization with the primary purpose to help local children and give them the opportunity to play the great sport of hockey. He played a major role in the EJHL as his commitment and dedication to the game of hockey has helped to instruct and develop hundreds of youth hockey players who have went on to have college and professional careers. When the Capital District Selects were sold in 2012, they were relocated to Norwalk, Connecticut and became the Oilers. Jim was retained by the Oilers as a consultant at that time and helped to ensure a smooth transition. Jim always put the best interest of the league and its players before all else and his sense of humor always brightened up the league meetings. Jim has spent time as a coach at the collegiate level and has also been part of Hockey Night in Boston.