Alexandra Carpenter – American ice hockey player who as of 2020, serves as the captain for the Shenzhen KRS Vanke Rays in the Russian Women’s Hockey League. She was a member of the 2014 United States Olympic team and is the daughter of former NHL player Bobby Carpenter. In her junior season at Boston College, she was the recipient of the 2015 Patty Kazmaier Award which is given to the top female college ice hockey player in the United States. It was presented during the women’s annual ice hockey championship, the Frozen Four. In the Fall of 2007, Carpenter joined the Governor’s Academy in South Byfield playing on the varsity team at just 13 years of age. She racked up a total of 155 goals and 136 assists over three years there. At the international level, Carpenter helped the United States win the 2009 Czech Challenge Cup in Prague. She was also the youngest athlete playing for Team USA in the gold medal game of the 2010 International Ice Hockey Federation Women’s Under 18 Championships. As of 2019, Carpenter has participated in five IIHF World Championships. 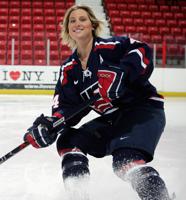 Angela Ruggiero – Angela is an American former ice hockey defenseman who serves as a member of the International Olympic Committee. Ruggiero is a four-time Olympian and during her hockey career, she was named as the best player in the NCAA and in the world by the Hockey News. She was a member of the United States women’s national ice hockey team receiving a medal in four Winter Olympic Games; including one gold medal in 1998, two silver medals in 2002 and 2010, and one bronze medal in 2006. She also competed in ten Women’s World Championships winning four gold medals and six silver medals. On June 29th, 2015 Ruggiero was announced as a member of the Hockey Hall of Fame’s Class of 2015 and was officially inducted on November 9th, 2015. She is only the fourth woman and the second American woman to receive this high honor. Angela is the all-time leader in games played representing the United States, male or female and has totaled 256. In her senior year at Harvard University in 2004, she was the recipient of the Patty Kazmaier Award as the top United States female ice hockey player. Ruggiero is the author of a memoir, Breaking the Ice: My Journey to Olympic Hockey, the Ivy League & Beyond, published by Drummond Publishing Group in 2005. The book details her hockey career, including her experiences with misconceptions about women's hockey and the challenges of being a female player in a male-dominated sport. She was the former Director of the New York Islanders' Project Hope, as well as the New York Islanders Children's Foundation. 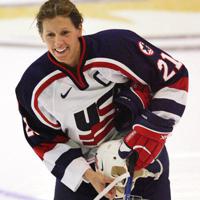 Cammi Granato – Granato is a former American ice hockey player and was one of the first women to be inducted into the Hockey Hall of Fame in 2010 and the International Hockey Hall of Fame in 2008. As of 2020, she is working as a scout for the NHL Seattle organization. She served as the captain for the United States Women’s Olympic team that won the gold medal in 1998 and is the younger sister of former NHL player Tony Granato. During her time at Providence College, she was named freshman player of the year and was later selected as the Eastern College Athletic Conference’s Women’s Hockey player of the year. In 1992 and 1993, Granato led Providence to league titles. In 93 college games, she scored 135 times and assisted on 110 others for 245 points. She is also the recipient of the Lester Patrick Award in 2007 honoring her contributions to hockey in the United States. Granato played in every world championship for the United States from the inaugural event in 1990 through 2005 and was named USA Women’s Player of the Year in 1996. In the 1998 Olympics she scored the first ever goal for the United States Women’s Olympic team and is their all-time leading scorer posting 54 goals and 42 assists for 96 career points in Olympic Games.